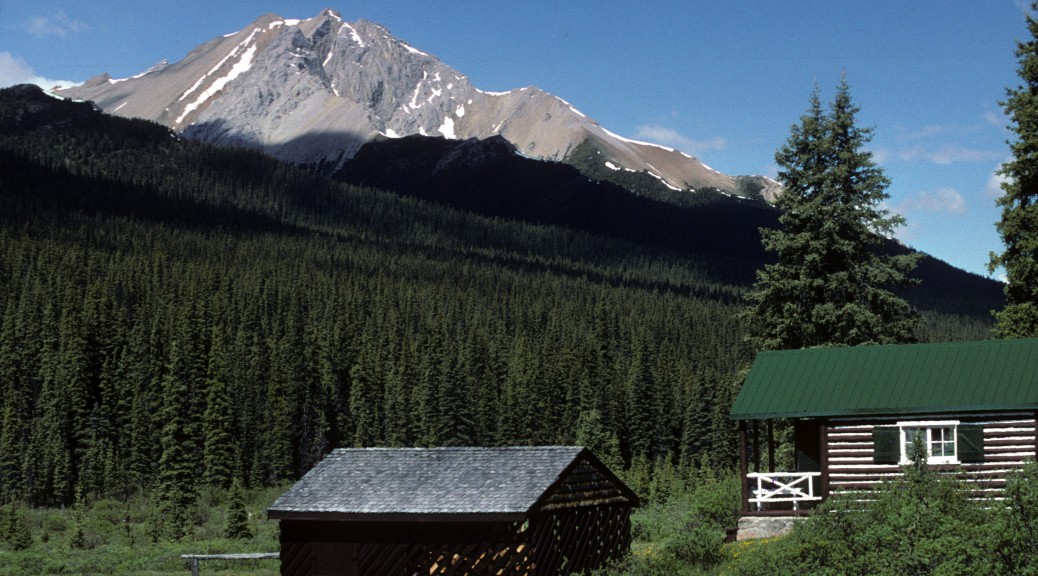 It was difficult to hike to the Medicine Tent warden cabin in Jasper National Park without walking on top of grizzly bear tracks but every two weeks during the summer of 2003 we did just that.

Leaving our truck at the Cardinal Divide and making our way up and over Rocky Pass took us through prime grizzly bear habitat, whistling loudly as we passed fresh diggings and the berry laden piles of bear shit that marked our route.

The fact that Big Boy was prowling these parts didn’t make the hike any easier.

Big Boy was a grizzly bear that had been collared by researchers as part of a regional study to look at the effects of industrial land use on grizzly bear populations in the area.

According to John, the helicopter pilot who helped us get a field season’s worth of supplies over Rocky Pass before the metre-deep winter snows finally melted, Big Boy had a reputation for being a little grumpier than other bears in their study.

To make matters worse, he was last seen running down a mountain that formed one side of the pass with what appeared to be a cape flying over his shoulders. Upon closer inspection the cape turned out to be an entire Bighorn ram that Big Boy was carrying in his jaws as he ran to get away from the capture crew in the helicoptor!

That story gave us confidence of sorts and kind of put a spring in our step, if you will.

We had done our share of hiking in grizzly bear country but dealing with a pissed off bear wasn’t exactly what we were looking for.

Well, we were in fact looking for bears, just not necessarily that kind.

Our twice monthly sojourns had more to do with checking and moving a series of remote cameras that we were using in the Medicine Tent Valley to monitor wildlife use in an area of the park that not many people ventured into.

It was a control area of sorts since we were also monitoring trails in areas of the park that had higher levels of human use. The comparison was meant to give us some idea of how wildlife responded as the number of humans in an area increased.

In those higher use areas, our cameras rarely captured grizzly bears, wolves or cougars, large carnivores known to be sensitive to increasing levels of human activity.

But one of the first pictures we captured in the Medicine Tent Valley was, you guessed it, Big Boy. Thankfully he walked past the camera and never ate it.

Other than that one photo, he wasn’t pulled out of the line-up in any of our other photos but we can only guess that we shared the trail with him based on the size and variety of bears tracks we encountered, particularly on one muddy section of the trail where you literally could not put your foot down without stepping on a grizzly bear track.

Out of respect, I consciously tried to step around them just to stay on the bear’s good side.

Invariably we made it to the cabin in one piece and in good spirits.

It was hard not to be in good spirits.

We had hiked into one of Jasper’s many beautiful valleys across a mountain pass that was equally as breath-taking. We had made our way safely to the cabin, had a great supper planned and to top it off, we had planted some beer in the river.

How much better could it get.

A few hours later we were sitting on the porch rubbing our bellies and looking at the stars fill a crystal clear sky.

The next day we would replace camera batteries and film and move the cameras to a new location along the trail, after which we would clean up, load up and hike back to the Divide.

Two weeks later, we did it all again.

It was one of the best summers of my life in Jasper and if I had to do it all over again, then Big Boy be damned, it would be off to the Medicine Tent and back again.

One thought on “Medicine Tent Cabin”