To travel alone in the backcountry is one thing but doing it at night, by boat, along one of the most rugged coastlines in the world brings a whole new meaning to the phrase. Yet we did it all the time and those night patrols probably rank right up there as some of the most inspiring, exciting and confidence building experiences a young person could ask for.

Being a coastal warden was a position I coveted so when I was assigned to work as the seasonal park warden responsible for patrolling Terra Nova’s extensive coastline I thought I had died and gone to heaven. And when I could actually claim one of the park’s small patrol boats as my own, kind of, well how much better could it get?

The answer to that question was Park Harbour Cabin.

Park Harbour is about as far as you can get from Headquarters Wharf in Newman Sound and still be in Terra Nova National Park. Newman Sound itself is a long arm of Bonavista Bay that like so many others cut into the shores of Newfoundland to create the unique geography that makes the island a boating paradise.

To get to Park Harbour you first have to traverse the length of Inner and Outer Newman Sound and round Hurloc Head.

While the first leg of this journey offers all of the protection that a coastline could offer to someone travelling in a small boat, the lynch pin in the trip is getting around Hurloc Head.

Beyond Hurloc Head is England.

In seafaring terms, that’s a long fetch, a huge distance for wind and water to combine energies to send waves pounding against Hurloc Head, particularly in a nor’easter, because there literally is nothing to break the force of that combined energy hitting Hurloc Head when the wind is blowing out of the northeast.

Suffice it to say you had to pick your days (or nights) to get around the headland.

But when you did, you had the wind at your back and you were home free in Lions Den, another small bay or indentation on the coastline of Terra Nova that punched itself into the rocky cliffs and carried you into another whole set of experiences.

Near the very bottom of Lions Den was Park Harbour.

Night patrols invariably followed a daytime patrol that allowed us to determine if there were any fishing nets along the route that we should be concerned about. Salmon nets presented a particular hazard since they were tied to shore and ran perpendicular to the shoreline for several hundred metres before being anchored, with the top line supported by a series of floats.

You did not want to run over a salmon net, especially at night.

Our smallest patrol boat was the Gobidin, a Beothuk term for “eagle”. (The Beothuks were the aboriginal people of Newfoundland.)

The Gobidin was an eighteen foot plank boat built by the park carpenters who were among other things, master boat builders.

With a 60 horsepower Johnson outboard, the Gobidin was a sleek racehorse compared to the slow, wide, stern operated fishing boats that plied the waters of Bonavista Bay.

With a windshield and forward controls you could sit up front and steer around rocks, driftwood, nets and buoys or any other obstacles that got in your way.

The plank seats were less than comfortable but they provided an easy way to jump from the front of the boat to the stern to quickly pull up the motor to allow the boat to drift smoothly over nets.

This practice wasn’t necessarily condoned in any safe boating guide and probably wouldn’t pass any modern task safety analysis but it was a practical way of getting the motor up, even if it did look odd to see a boat underway with the sole occupant hopping seat to seat to get to the back of the boat before returning in similar fashion to the front.

So the fact that we sat on our life jackets rather than wear them, also shouldn’t matter.

Keyhole life jackets were obviously meant to be sat upon as they were practically useless to wear.

Mustang’s first “Floater” jackets finally solved this dilemma, providing warmth and floatation, although the common creed among the fishermen in Newfoundland was that it was better to die quickly by drowning than to slowly freeze to death in the ocean.

But back to the night patrol.

These forays were meant to deter poachers who were known to net the small brooks and streams along the coast of Terra Nova that provided spawning areas for sea run trout so our presence at night as well as day kept poachers off guard and less likely to come into the park.

Travelling by night, usually under the stars or by the light of the moon and unaided by artificial lights, is one of those experiences that transcends description.

As your eyes adjust to the low light you are amazed by how well you can see details on the water and you quickly learn landmarks by their unique silhouette against the backdrop of the rising moon or ambient light of the stars.

Slow speed is the essence of a safe nighttime patrol and you spend as much time drifting, looking and listening as you do under power.

And as much as you think people will see or hear you, poachers never really expect you, especially at night.

While we had success intercepting poachers along the coast at night, we will never know how much of a deterrent our patrols provided.

But they got us out and earned us a degree of respect among fishermen and poachers alike, that we meant business.

Navigating past Hurloc Head there were still miles of shoreline to check before first light found us at the entrance to Park Harbour and the welcome sight of the patrol cabin.

Park Harbour itself was really a small cove but its name was more than earned by the safe harbour it provided to boats and mariners who plied the park waters, and especially those of us who ended up there at the end of long night patrol or after a particularly stormy trip round Hurloc Head.

Nestled in the trees adjacent to a small creek, the cabin was a classic wood frame building that had the extra amenities of propane heat and running water, courtesy of said creek and some innovative piping.

It was always a welcome sight and tying up to the small wharf brought a sense of accomplishment of another successful venture.

When other people were only thinking about getting up to start their day, Park Harbour Cabin provided a place to finish ours. It was a refuge from the dawn and a place to while away the morning hours, lulled soundly to sleep by the murmur of the creek finding its way to salt water.

Invariably sleep was a short one as Park Harbour put us as far away from the office as possible and we now had the entire day to ourselves to explore Lions Den and its secrets, unencumbered by anything or anyone.

There were nooks and crannies to try and slide the Gobidin into, game trails to explore, shorelines to walk and incredible marine biodiversity at our fingertips including anemones, mussels, starfish, kelps and crabs.

How much better could it get? 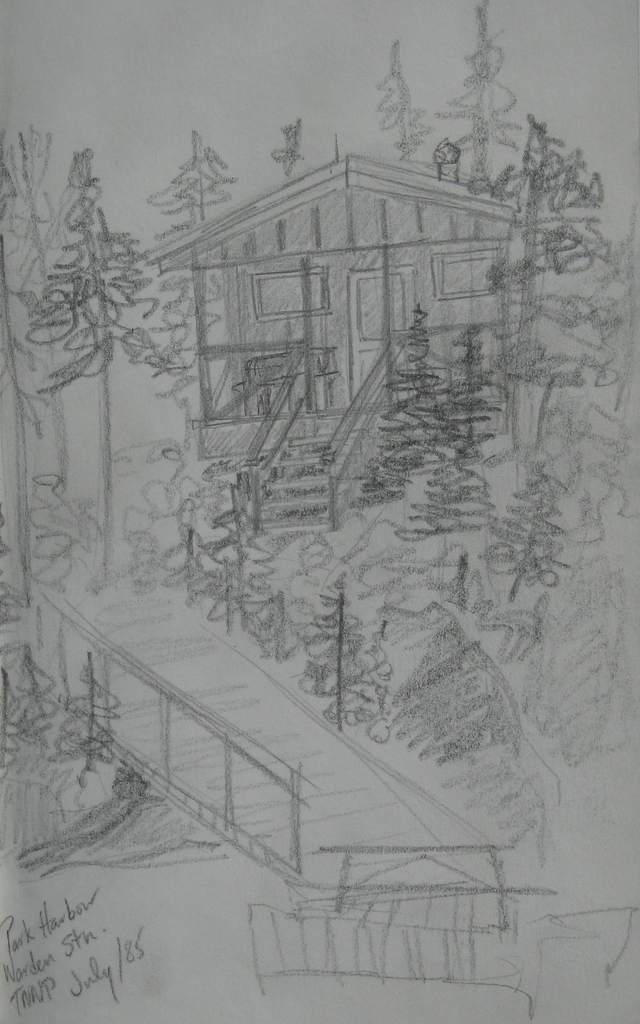